With the passenger’s side removed, the interior shows the lithium ion high-voltage battery running along the center of the vehicle. In this 2015 VOLT, the rear seat is now a three-seater, making this a 5-passenger vehicle with 8 airbags. Shown in its orange color is the Manual Service Disconnect. It is accessible by removing the small storage tray above it in the center console. The individual sections of the 360-volt battery are also visible in the lower opening area. Why the VOLT is not a pure electric plug-in vehicle is because of what you see here under the hood. The 1.4 liter gasoline-powered engine, called the range extender, runs at a steady rpm to generate electricity that recharges the HV battery. For this reason, remember the VOLT has a 9 gallon gasoline tank and an internal combustion engine onboard. It’s not a pure EV like one might think!

Note: The orange cables along the top of the driver’s front fender are only energized when the VOLT is plugged & being recharged. On an EV, orange means 60vDC+.

I took this shot from a program that was explaining the VOLT’s 360v lithium ion battery. This shows the ‘modules’ of the VOLT battery with the front of the vehicle being to your right. The wide portion would be beneath the rear passenger’s seats. Front seats are bucket seats due to the battery running along the center area.

Remember this is a liquid-cooled HV-battery so you actually could see an antifreeze-type liquid leaking out if the battery were physically damaged in a crash.

Special Offer:
Any instructor desiring these four images as high-resolution jpeg files for use in a vehicle rescue training program can download them here. 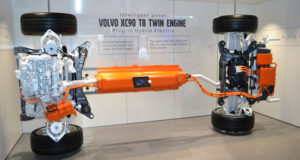 © Copyright 2023, All Rights Reserved. | Powered by WordPress | Designed by FirstArriving.com